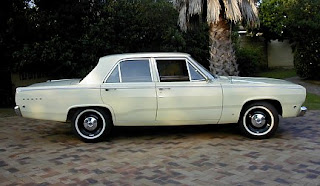 Well, Dad got a new car today with the insurance money--a Rebel! The insides look great! I found three cents in the back seat. I'm gonna worry that this one will get stolen, now, too, though.

NOTES: The Rebel was probably about the most non-descript car in the world. It had no personalty the way some cars do. I sometimes thought my Dad purposely got that car--ours was appropriately gray, btw--just on the belief that it wasn't likely to be stolen. It wouldn't be. He had no idea of knowing today, however, that this Rebel would be the last car he would ever drive. In 1978, he was hit by a car while walking at a crosswalk. It took a year of physical therapy for him to recover, during which time the car sat silently in front of the apartment house gathering trash underneath it. Eventually, someone complained to the police and they insisted he move the car. He drove it around the block once and parked it in a different spot. Although he lived another 12 years beyond that, he never drove a car again. The day after that last drive, he sold the Rebel.
Posted by Booksteve at 12:49 AM