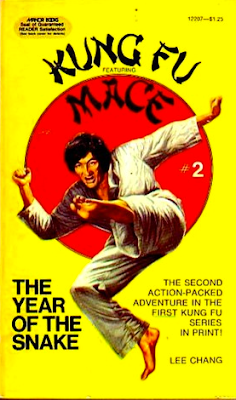 Terry says a new CASTLE OF FRANKENSTEIN is out over the river. If it is, I'll have to get tot and also pick up the second Kung-Fu/Mace paperback.

I got TV GUIDE and there are SO many good shows on next week. Even one with Roddy in his APES costume.

Good news! A guy at school claimed he saw THE EXORCIST yesterday and if he could see it then they can't keep me out either! For the moment, though, I'll be content with BLACK BELT JONES.

NOTES: CASTLE OF FRANKENSTEIN was a hipper version of FAMOUS MONSTERS, edited during this period by my future Facebook friend Bhob Stewart. It suffered from erratic distribution, however, so you had to grab it when you saw it.


The reference to Kung Fu/Mace threw me until I looked it up. It was the book seen above, 2nd in a  series of hacked out martial arts novels starring a violent ersatz Bruce Lee type character. Looks like it ran at least 6 volumes. Looking at the covers, I think I dropped it after # 3. I had literally forgotten about these until tonight. Wonder what ever happened to my copies.
Posted by Booksteve at 12:45 AM

OMG, I had (and still have) a copy of the first volume in this series! I remember the bone-cruching kung-fu fight descriptions that thrilled me. I was into the Kung Fu Tv series, Bruce Lee, and Marvel KF magazine and more at this time, besides Trek and Apes. Glad to see I wasn't the only one!