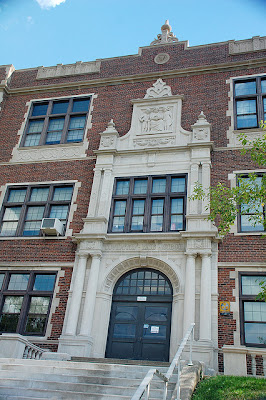 School days are here again. I called Doug at 7 and told his Mom I'd meet him before 8:15. At 7:35, I left to catch the 7:45 bus. I met Dennis Pine at the bus stop. Uptown, Sherri and her sister Sharon got on. As we went along Madison, more and more people I knew boarded. We got off at 25th Street and Dennis walked with me back to 24th to find Doug's new house. It was raining a little. Doug's mother said he and his sister were already gone. Dennis and I walked up stairs to what my Mom says used to be called Holmesdale Court. We saw Alex Wallace and Dennis asked him about things. He pointed us to our rooms and even named my teacher. I saw Kenny and Roger. Once inside the Senor Building, I saw George. I remembered he was supposed to be in my home room so I followed him to it. In my opinion, it was a better room than most. They all seem to have good views. Kathy, Cindy and Caroline all spoke to me for the first time in months. I've got a lot of classes with no one I know in them. Finally saw Doug. He's in one of my classes. Everyone was pretty nice today. Hope it doesn't wear off. I have gym tomorrow and Tuesday. I got lost only once but for quite a long time! I'm also worried about my Spanish class. I haven't gotten my books yet. Coming home it was storming badly so I stayed a wile at Doug's. Then all four of us (Me, Doug, his Mom and his sister) came downtown. Already I'm nervous again about tomorrow.

After I got home, I read Batman comics all afternoon to the rhythm of the rain.

I may see PUFNSTUF at The Penthouse this weekend.

On the way home this afternoon, I think I saw a store that sold old comics. Hopefully I can check it out Saturday, too.

NOTES: I didn't catch PUFNSTUF until a later TV airing.

Terry had moved to the next county so wasn't attending Holmes. Eventually, he dropped out but got his GED long before we got our diplomas.

None of those mentioned above--other than Doug--were particularly close friends. Not even sure who Cindy and Alex were. Dennis was a guy I'd come up through grade school with--a trouble-prone youth with whom I had occasionally traded old comic books. Got a lot of THOR from him.

I was nervous and excited. Having been founded in 1853, Holmes was (and presumably still is) both the oldest and the largest high school in Kentucky. Since my old school had 7th, 8th and 9th grades, I was entering the new school not as a Freshman but as a Sophomore. The next three years were filled with promise at that point. Unfortunately, they were far from my best years and my up-util-then exemplary school work would suffer for it.
Posted by Booksteve at 12:30 AM

This is the time and year that I started Kindergarten !! It was a whole new experience for me .