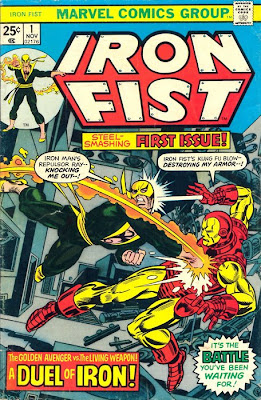 Also saw a preview of EARTHQUAKE.

I wrote my seven page science report on Apollo 11. I almost didn't make it. I missed the Beatles show because of it.

Mom got me a new lock, boots, pants, coat and shirt yesterday. I am so ready for winter.

I've decided to try to get a job as Mary Wood's assistant. Not right now but soon. Mary's talked with Linda! Who knows? I might get to yet.

I watched Steffie on McMILLAN AND WIFE.

NOTES: I remember just getting lost in THAT'S ENTERTAINMENT that day. It was already a year or two old but was on re-release. I was one of only a few in the theater--the Skywalk. I bought the soundtrack soon after. Had it up until a few weeks ago when I divested myself of my LP collection.

IRON FIST was a very well-done comic at first but the character was later incongruously teamed with Luke Cage (Power Man). Didn't work for me.

Mary Wood, as I mentioned before, was the longtime TV editor for THE CINCINNATI POST and I had already met her. It coulda worked.
Posted by Booksteve at 12:30 AM