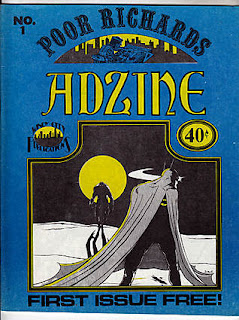 I got a free adzine in the mail today.

Terry says there's a lot of new stuff out over the river. Much more than I can afford. We're going over at 8:30 tomorrow morning to check out 2000 new books they got in at the Ohio Book Store!

NOTES: An adzine was a comics fanzine that consisted entirely or at least mostly of ads. I remember this one was pretty cheap-looking and homemade once you got past the cover but they had apparently gotten subscriber names from TBG so they sent me one. If it's the one I'm thinking of, it was called POOR RICHARD'S ADZINE.