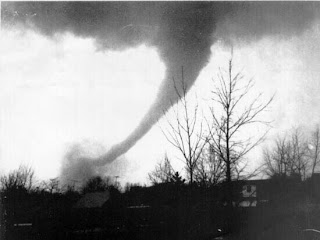 Today I talked with Kathy Allen for the first time in a long time.

I finished work in an hour, did what little homework I had and tried to help Dad fix his garage door but couldn't. This just isn't his year for things that concern cars.

The tornadoes did terrible damage all around last night.

The Reds won their opening game and Hank Aaron hit one homer. Only one more to go!


NOTES: Okay, in this case Mom wasn't overreacting. I didn't realize that yesterday in 1974 was the date of the infamously destructive Sayler Park tornado! This was an F5 tornado in what became known as the Super Outbreak in which five similarly violent twisters struck around the same time.


Dad had rented a garage space a couple of blocks away for the new car but the door never really locked and between the two of us, we couldn't fix it. Not a good sign.


Hank Aaron was one away from either tying or beating the home run record. Not sure which at the money.

Kathy Allen was a girl who had been a friend for several years in grade school. When Debbie moved away in 6th grade, Kathy and I sort of considered the idea of becoming a couple but it really didn't work out. She had quite a temper but a great sense of humor. Even though we had been in junior high together all along, we hadn't really had any classes together so we rarely saw each other anymore.
Posted by Booksteve at 12:02 AM

Wow! That is so cool that you were blogging/journaling during the exact period of the Super-Outbreak or "Day of the Killer Tornadoes". I don't remember it, as we were seniors in our final weeks of high school, but now-adays, this is a red-letter weather day! SO COOL, Steve!