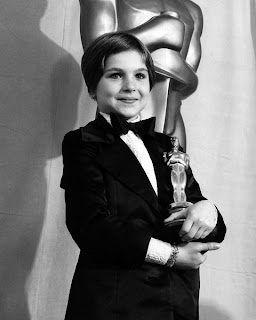 All the wrong people won the awards last night including Tatum O'Neal instead of Linda!!!!

I finally got the new TBG in the mail.

Terrible storms this evening and Mom was very scared.

NOTES: There had been a bit of a controversy when it was revealed that actress Mercedes McCambridge had "sweetened" Linda Blair's demon-possessed performance. Linda had still performed the difficult physical aspects of the role and the dialogue but the veteran McCambridge had added her rough voice to the mix for a better sound and that had been kept quiet. Mercedes wasn't happy and eventually was given a credit on the film.


I hadn't seen Tatum O'Neal's performance in PAPER MOON at this point; wouldn't catch it until it showed up on TV a few years later. In retrospect, it really was an Oscar-winning performance. Tatum was, as many child performers are, a natural. Also like many child performers going all the way back to Shirley Temple, however, she lost much of her natural acting abilities as she grew older.


My Mother was always scared of storms and passed that on to me. Even as I learned over the years that she was, on some levels, overreacting to basic thunderstorms, it had already been instilled in me. To this day, I worry a bit too much about thunderstorms...although, granted, in recent years there have been plenty in this area worth worrying about!
Posted by Booksteve at 12:30 AM