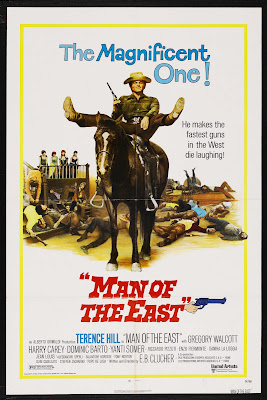 Another early start today. Read some recent FF stories when I got up.

Dad took him with me to the Post Office to get his check. We went across that new bridge, me for the first time. I took my camera and finished all 20 shots. On the way back, Dad let me out downtown and I went around and got all the new books. Also picked up a $1.50 Bruce Lee special. Doug would love it.

We got our check in the mail today.

Later in the afternoon, Terry and I planned to take the bus to go see MAN OF THE EAST at Newport but we missed the bus. Caught a later one, though. The hill was muddy and there were problems with the theater and the print. The picture wasn't as good as Terence Hill's other films, either. Turns out it's several years old! We stopped at the poster shop and a few other places, then came home. Terry bought a  whole box of APES trading cards. He's crazy sometimes.

NOTES: I still have a photograph I took that day of my dad walking away from the car toward the Post Office (where he worked). You can see my reflection in the car's rear-view mirror. I was hoping to find it and post it but apparently I've never scanned it and I'm not sure where he original is.

MAN OF THE EAST was erroneously billed as a TRINITY picture but, of course, was not. Taken on its own, though, it was much fun. I watched it again earlier this year.

Turns out Terry was, of course, ahead of the game regarding buying a whole box of trading cards. In a decade or so, even I would be doing that until I finally gave up trading cards completely.
Posted by Booksteve at 8:17 PM