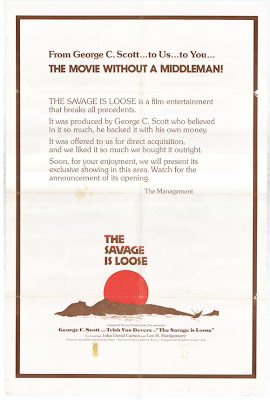 I made it through today. Tomorrow should be a lot easier. I've got 3 tests tomorrow but I don't mind tests as much as Gym.

Dad went over and saw THE SAVAGE IS LOOSE today. I was going to ask him to take me when he was talking about going Friday but he says it isn't very good anyway. We may go see MAN OF THE EAST, then, with "Nobody," "Trinity" or just plain Terence Hill.

PLANET OF THE APES has been canceled as of December 27th. Too bad. I kind of expected it, though.

The color on the TV went off again. I watched Shatner on POLICE STORY, though and during that hour they advertised THE GREEN HORNET. Should be great! Hoping to catch it tomorrow or on Thanksgiving day.

NOTES: My Dad rarely went to movies on his own but for some reason, this one intrigued him. THE SAVAGE IS LOOSE starred George C. Scott and his real-life younger wife, Trish Van Devere along with John David Carson, an acted handed many chances and yet who never quite caught on. Directed by Scott who was still on a career high after PATTON, the plot dealt with a family shipwrecked on an island and the sexual tensions fostered as the young son grows up. It was generally NOT well-received.
Posted by Booksteve at 12:30 AM