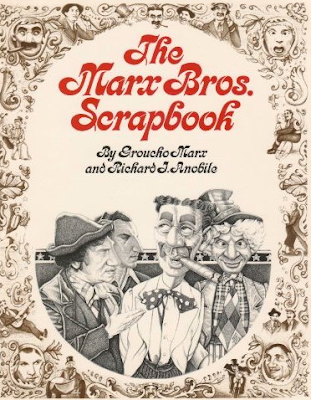 LAND OF THE LOST was really good this morning.

I went over the river this afternoon and bought THE MARX BROTHERS SCRAPBOOK. I may ask for WHY A DUCK?  for Christmas.

I discovered HARRY AND TONTO was on downtown. Mom might go with me to see it tomorrow.

Wonder of wonders! Early afternoon rain became snow! The first snow to actually stick this year! Later I went out with Dad when he took out the trash. I just walked around the house but oh, it was marvelous!

Terry called and talked for a long time this evening. He said he saw THE GREEN HORNET twice today!

NOTES: THE MARX BROTHERS SCRAPBOOK was a major early book in my Library and is still occupying its position on a shelf in the next room as I type this. I liked it but apparently Groucho didn't and disowned it even though he's credited as co-author.

WHY A DUCK? was another Marx Brothers book, all photos and text from the films. The copy I eventually got was one of the first books I ever purchased at Waldenbooks in downtown Cincinnati, by then marked down as a bargain book. Eight years on from November, 1974, I got my second real job there, a dinky little Christmas help position that would last 21 years (with a return even after that for a few more!).

Oddly enough, when Terry and I reconnected a couple of years back via Facebook, the first thing we did was go to the new version of THE GREEN HORNET. He loved it. I didn't.

Land of Lost *was* really good that morning. The episode was "Follow That Dinosaur" and involved the Marshall children finding a dummy dressed in American Revolutionary War clothing and bearing a diary which recounted the efforts of another man who been trapped in the Land of the Lost and his efforts to escape. *SPOILER ALERT* The Marshalls learn tragically that he never escaped, having been trapped by the Sleestaks and starved to death. This episode was my favorite as a child and probably still is.