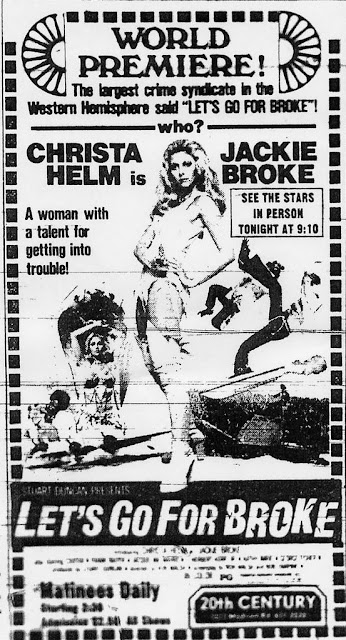 One thing that I paid only marginal attention to at Christmas time in 1974 but that would end up being very important to me in the long run was the World Premiere of the movie, LET'S GO FOR BROKE, held in Cincinnati at The 20th Century Theater. I didn't know how to get to that neighborhood theater so, while I remember the incessant radio ads, the thought of actually attending the premiere was not on my radar. I vaguely considered looking for the picture when it came closer. Little did I know that it never would.

On Christmas evening, 1974, LET'S GO FOR BROKE star Christa Helm appeared live and in person at the World Premiere of what would prove to be her sole starring vehicle. Due to the death of local TV legend Paul Dixon, there was no coverage of the premiere in the newspapers. After the film left Cincinnati, it failed to find a distributor and never played anywhere else at all.

The sole positive copy of the Premiere version of LET'S GO FOR BROKE sat forgotten in its 35 MM cans in the closet of the film's director Ron Walsh for the next three decades. In the meantime, the picture's star, lovely blonde Christa Helm, was murdered in February of 1977. That murder remains unsolved to this day. In 2006, though, my memories of LET'S GO FOR BROKE intersected with a cold case investigation into her death. For a while, progress was made toward finding her killer as well as finding her movie. Because of the work of myself, the actress's daughter and writer John O'Dowd, CBS did a one-hour 48 HOURS MYSTERY on the case. Partly in exchange for my helping with the show, I pointed them toward the movie, they converted it to digital and I received one of an extremely limited number of copies of LET'S GO FOR BROKE. Tragically, Christa Helm's murder remains unsolved as of this writing.