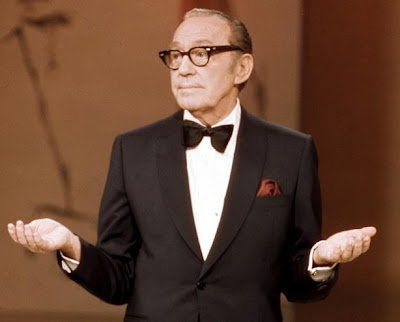 Christmas is over again.

Dad called in sick again and he was in bed most of the day. Mom wouldn't leave him to go to the show with me and Terry didn't want to see any others. I'll have to play it by ear now. I did get to pick up the new books that were out, though. I decided to skip a lot that I usually get.

I forgot but yesterday, Jeff came to me with a wishbone. He said whoever got the bigger piece would be the first to marry. I got it. I have no idea who I could marry at all but I guess it could happen. We'll see.

Everybody's favorite miser, Jack Benny, must have suffered a stroke or something and they said on the news he's been given 'til morning to live.

NOTES: Wishbones don't work. Jeff beat me in getting married by more than a few years.

Jack Benny had been a favorite since childhood and remains so today. In actuality, he was dying of pancreatic cancer, the same disease that would take my mother just a few years later. He wouldn't last 'til morning. He died on the 26th.