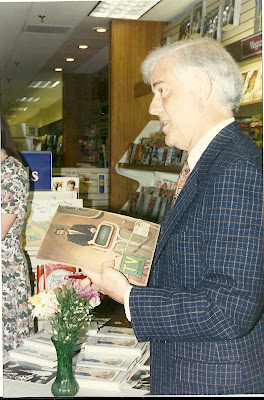 Noel Neill (Lois Lane) was on with Mike Douglas! She talked about the cast, George Reeves' suicide, her college shows, and even had a film clip! It was her birthday and they brought out a cake with a Superman symbol on it.

Mom bought me a cheap magic kit but it was still pretty neat! I've already mastered a few tricks. Oh, I love it!

Dad gave me another early present--a new tape recorder! Same type I got last year but I hope it works better.

Saw a very good Christmas episode of BEWITCHED. Then watched a little of Roddy on the daytime HOLLYWOOD SQUARES while I helped Mom wrap presents.

This was Christmas eve. For so many years, I would go to bed in anticipation of waking up to tomorrow's gifts. So much has changed.

NOTES: Noel Neill is still alive in 2012 and recently her birthday was celebrated on Facebook.

Today I watched a vintage Christmas episode of BEWITCHED online. Could it be the same one??? This one co-starred Bill Mumy, a longtime favorite actor whom I've had the pleasure to meet and talk with a number of times through the years and who is now a Facebook friend.

Nick Clooney's national game show was a bit ridiculous as Nick, himself admitted to me twenty years later when he signed the MONEY MAZE picture seen here on a TV mag cover I kept from that time.

BY this point, I was already suffering holiday depression that would continue throughout the years. I don't do Decembers well.
Posted by Booksteve at 12:00 AM

Sorry you don't do Decembers well, but hopefully a "Merry Christmas" from this long-time reader offers a small bit of cheer. You know what depresses me? Presumably only a week left of my daily reading of this diary!

As 2012 ends, so does 1974. There was no 1975 Journal and we've already had '76. After that, there was only the Journal from 1980 which started mid-year as a chronicle of my experiences with a local comedy troupe but morphed into a day by day look at my failed attempts at getting one of the female members to sleep with me. Could be interesting to share but...no.

Still deciding whether to take '74 and '76 offline completely after the year ends.

Well, as I commented in the 12/25 post, I'm hoping you leave them up for new readers. I'm a little younger than you (45), but as a lovelorn geek myself, I experienced a lot of what you did and while these events took place almost 40 years ago, I think they aren't too different from what today's teens feel. These journals show they're not alone.

I'm thinking these might have been White Castle mini-hamburgers. I DID tend to eat 4 regular hamburgers at a time in those days but not 6.