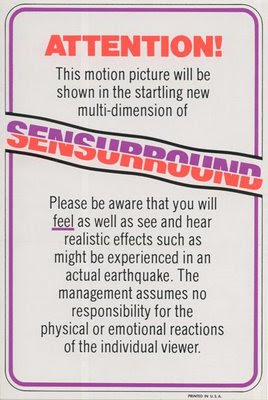 Dad was real sick again today. He went to the doctor with Mom. Because of this, I reverted to my original Friday plans.

Terry and I went over the river and caught the bus there right away. We passed the Valley Cinema by at least four blocks. It was only the second time I had been to the Cine Carousel but I remembered it well.

FREEBIE & THE BEAN was there, too, but we'd gone to see EARTHQUAKE and we did. Sensurround was fun but I'm sure glad all flicks don't have it!

Afterwards we walked back to the Valley, my first time there. It seemed a bit like the old Liberty in Covington. Really! We went in in the middle. It was also good. Linda's role was a small one but I loved it. I should. I waited long enough to see her in it! Now I've seen all of her films except SARAH T...

We got back downtown about 6. I got a few things at Fountain. That cute girl was working.

Had to go straight to work when I got home.

Later I saw the very last APES show--a rerun, of course. I only missed one of the whole run. Bought some more APES cards this morning. Bet they'll be hard to come by now.

NOTES: Somewhere in here my dad developed juvenile diabetes but I don't believe this was it. Seems like that was a year or two later...although I don;t recall it from my '76 Journal. Hmmm...

I usually thought the cute girl at Fountain News was Mexican but sometimes I wondered if she was Indian...as in "from India." Her parents ran the store for many years.

I can't believe I actually planned on and saw two big movies in one day less than a week after I had done the same thing with THE TOWERING INFERNO and YOUNG FRANKENSTEIN. I did, though. EARTHQUAKE was the first and the unnamed second one here was AIRPORT 1975.

Sensurround was the new process developed by Universal that made the seats shake in the theater, supposedly to enhance one's filmgoing experience. It kind of worked with EARTHQUAKE but was later used with ROLLERCOASTER, MIDWAY and the theatrical release of BATTLESTAR GALACTICA to lesser success, then retired.

I don't believe I ever returned to either the Valley or The Carousel. Too far out from downtown.

PS--Due to popular demand, I have decided I will leave both 1974 and 1976 online after the year ends. Tell your friends!

UPDATE--In the latest of many parallels between 1974 and 2012, this afternoon I unexpectedly received an early birthday gift from a friend that included AIRPORT 1975 on DVD! So here I am, exactly 38 years after I first saw AIRPORT 1975...and I'm watching AIRPORT 1975! Even weirder, my friend of 20+ years now, actor Bob Hastings, is in the film!
Posted by Booksteve at 12:30 AM

I've really enjoyed reading your 1974 journal all year. Sorry to hear there gonna be no 1975 journal.
Thanks for all the cool memories of growing up the 70's. I remember all the good and not so good times as well!

This and the 1976 blog have been a part of my breakfast routine. I have thoroughly enjoyed the trip back. I will miss it. Thank you for sharing it.

The main thing I think I remember about 'Rollercoaster' was the performance by Sparks - it was a 'Who'-type performance in which Russell Mayle smashed the set, I think.
It's odd how you pick up parallels with a certain year from your past... all through 2012, I have been picking up eerie parallels with 1980, when I was 10/11. Freaky.

I saw Rollercoaster in the theater "in Sennsurround" and remember a few things. It was LOUD, all the vacant seats (of which there were many for this midweek matinee) shook to the massive rumble of the rollercoaster itself and that there was a warning on the doors to the theater saying that people with heart or nervous conditions shouldn't subject themselves to Sennsurround!