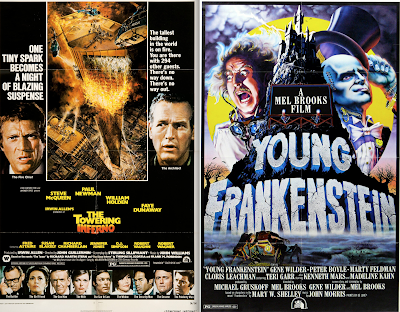 Another big conquest. I talked Terry into going with me to the new Showcase Cinemas and we caught the bus about 11. We got off at the right stop, Commonwealth Road, and walked down to I-75. It really wasn't as far as I thought it would be. Maybe 7-8 blocks straight down. That was where I had expected the only real problem to be but it wasn't. Next there was a long walk to the Interstate bridge where the cutoffs all met. There was no sidewalk but you could walk in grass along the side of the road and we did. After that, slightly uphill to get back out of the expressway area. All told maybe another 4 blocks from beginning to end.

THAT's when we found the hard part! To get to the actual theater itself (there was a big sign) we had to walk up a great big, long, steep hill! In the long run it took us nearly as long to get there once we got off the bus as it had the other one out in Springdale a few months back. When we did finally get there, the building looked exactly the same!

We were exhausted but paid three bucks to see TOWERING INFERNO first. It was longer than I had expected but we got out just in time to catch the beginning of YOUNG FRANK for another $2.50.

Coming back, after nearly 5 hours of movies, we attempted to take a short cut but that didn't work. Ouch! Ended up catching a Garage bus so we had to transfer at 12th Street. Got home and had to go straight to work even though I was exhausted!

Finally hear from Yoshiko. She sent a combination Christmas and birthday card. That was nice of her.

NOTES: I was 15 here and didn't drive. As a reminder, because of my motion sickness issues, I didn't learn to drive until I was 32. Over the next 15 years, I would end up walking that long and actually treacherous walk probably 50 times. Sometimes I would talk Terry's Mom into taking us or, later on, other friends. But I walked it a lot.

In retrospect, I've always felt seeing both films that day was most likely a mistake as I have never really enjoyed YOUNG FRANKENSTEIN to the extent I feel like I should.

Richard Long was the actor who had starred on the then-relatively recently canceled NANNY & THE PROFESSOR sitcom I had been enjoying in reruns then.
Posted by Booksteve at 12:00 AM