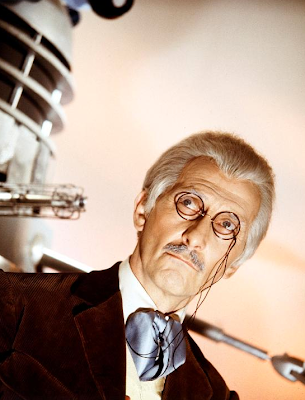 I began reading ALICE when I got up today. Later in the morning, I watched Marlo and The Muppets on WONDERAMA.

Went over to Fountain to get THE NATIONAL ENQUIRER.

Watched DR WHO & THE DALEKS again. Love that movie!

At 7:30, I watched an hour long uninterrupted tribute to Jack Benny. It was live and quite marvelous. Later in the evening, I watched JUDGE DEE AND THE MONASTERY MURDERS.

IT. Twice. I've decided that next year I'm not going to try to stop cold, but gradually. Maybe I can slow down until I quit.

NOTES: Wow. As I type this up, without having read it in advance, I'm watching a DR WHO episode on Netflix. In 1974, as far as I knew, the only Doctor was Peter Cushing who starred in the two Dalek features loosely adapted from William Hartnell episodes.
Posted by Booksteve at 12:30 AM