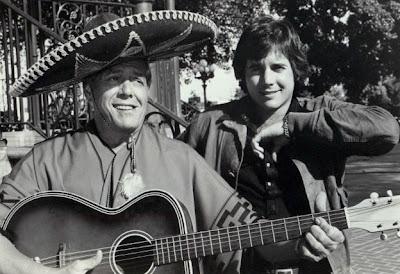 Spent most of the day watching history in the making. It was really something the way it worked. I hope Mr. Nixon gets a fair deal now.

I went over the river but they didn't have anything. I returned empty-handed.

I went uptown with dad and it was neat to see EXORCIST still at the Madison.

I re-entered the TV Bloopers contest with the game show question. What President's picture is found on a ten dollar bill? Answer--Alexander Hamilton. Only he wasn't a President! This time I know it's definitely a mistake. I already mailed it. If they get mine first, I get 50 bucks which I'll put in my savings! By this time next year, I WILL be able to afford to meet Linda! Well, if I can ever find out definitely where she's at!

Nixon cut off Roddy on last night's Bicentennial Minute and because it was dated for yesterday specifically, they can't ever run it now. Boy!

I stayed up 'til after 12 to watch Desi Arnaz, Jr. in CALIFORNIA MY WAY. I left for bed, though, after I got to see Desi. Sr and a trip to the movie studios.

NOTES:The Bicentennial Minute was a nightly one minute "show" that aired for a couple years leading up to the actual event in '76. Each night had a celebrity reading a brief remembrance of a major US historical event that occurred on that date. Thus, by missing the date, Roddy McDowall's minute was considered moot.

Wish I could remember that CALIFORNIA MY WAY. IMDB says it also featured Cass Elliot, Paul Williams, Ross Martin and Desi's former bandmate in Dino, Desi and Billy, Dino Martin. Seen above are Desi Sr and Jr from the special.