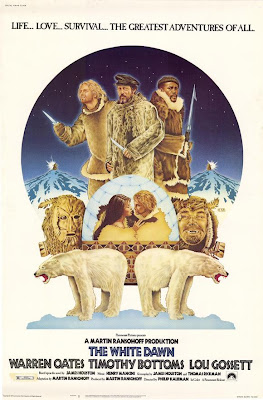 I managed to avoid IT today!

Got some new mags and INSIDE COMICS.

The only movies I want to see right now are DEATH WISH, BORN LOSERS and WHITE DAWN. Whether I get to see them or not is something else. THE MAGIC CHRISTIAN is showing uncut at the Alpha. Too bad. I'd love to see that.

Learned that Linda is making a TV flick for NBC called BORN INNOCENT. Should be great! EXORCIST is still at the Madison.

NOTES: The Alpha had been an adult theater that was always getting in trouble in Cincinnati and eventually closed. They reopened for several years as a repertory cinema. A little complicated to get to but in a year or so I figured out the bus routes and was there most every Sunday afternoon.

I never did see THE WHITE DAWN. In fact, I never even recognized the title when I saw that I had written it here. Looks like it was an adventure drama about whalers trapped with an Eskimo tribe. Warren Oates, later a favorite of mine but not yet then, starred.

I just picked up the paperback novelization of Born Innocent at an estate sale a couple weeks ago.