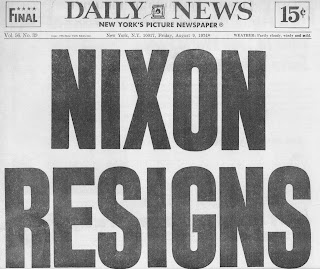 It wasn't one of my better ideas but Terry, Doug and his sister and myself all went together to see BORN LOSERS. None of them seemed comfortable around each other.

The picture was good but it did leave me wishing I had seen BILLY JACK when I had the chance. Also it made me sick the way those creeps were pushing everybody around and raping all the girls. Made me so sick I'd probably go after 'em myself but more like Paul Kersey in DEATH WISH than BILLY JACK! Damn!

At work, I broke my own record again. Just about 25 minutes. Of course, there wasn't as much trash as usual.

Mom wanted me to walk over to Becker's but I told her I didn't feel like it. Dad went but was gone over an hour. Mom got so worried I was wishing I had gone but he finally got home just fine.

President Nixon resigned! A sad day for me. He was, in my opinion, the single greatest President of the century!I defended his name all through this Watergate business! But I believe and hope that he is doing the right ting here. The country can't be successfully run by a man who has lost the respect of so many. As for me. I will always have great respect for Richard Milhous Nixon!

NOTES: Ummm....or not. What can I say? I was fifteen and not the most politically conscious kid on the block, y'know? I had had to write a report about Nixon when he had first won a few years earlier (mostly cribbed from LIFE magazine) and later was chosen as the head of the Re-Elect Nixon mock campaign in junior high. With everything that's come out since and everything I've read and heard and learned about the man since, this has long since ceased to be my opinion!

And yikes! Was I saying I'd buy a gun to go after guys like in that movie? For those who don't know, I've been involved in the movement for safer gun laws as an activist and supporter for some years now.

BORN LOSERS, btw, was NOT a good movie, then or now. It was a cheap, violent expatiation film. Even Tom Laughlin's Billy Jack character had yet to be fully developed. The only reason it was re-released then was to cash in on the later film's surprise success. Actress Jane Russell grabbed a quick paycheck for a brief, thankless role in one of her final appearances on the big screen. Otherwise, the thing I took away from the film was actor Jeremy Slate, so mean in this but, as I learned over the years, adept at all kids of roles from westerns to silly comedies. He was even the hero in THE AQUANAUTS on TV with future Tarzan and Doc Savage Ron Ely.
Posted by Booksteve at 12:30 AM