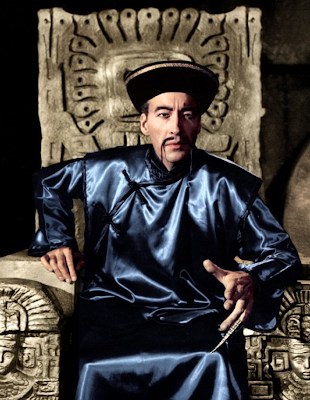 I almost avoided IT today but not quite.

I worked some more on my new story.

I watched a very old episode of I LOVE LUCY with George Reeves as Superman! Brought back lots of memories for me even though Reeves committed suicide just after I was born.

I didn't want her to but Mom did my work when two of those dummies next door stayed until after 8:30 and there was a movie on I wanted to see. I went over by 10 but she was almost done with my stuff by then.

SHIRTS/SKINS, though, was one of the best TV movies I've ever seen.

I stayed up to watch FACE OF FU MANCU. Much better than the last Fu Manchu film I saw. This one was really the first Chris Lee one. The other I saw was AGAINST ALL ODDS, about two years ago. It seems as though there was no Fu Manchu movie by that name but I know there was. Maybe I can find out somehow.

NOTES: What was that, like ONE whole day since I assured myself I was now mature enough to avoid IT?


Seems like I had caught the ending of that LUCY episode at a friend's house some years earlier but I think this was the first time I had seen the episode all the way through. If I recall correctly, THE ADVENTURES OF SUPERMAN itself hadn't been seen in the local market since about 1970 or so...a world of time at this age!


I'm glad I enjoyed SHIRTS/SKINS. Wish I could remember the slightest thing about it at this date...including who was in it.

In those pre-IMDB days, I must have turned to some reference book or another to determine the lack of a Fu film with that title...or so I thought. Christopher Lee, then and now a favorite of mine, had starred in 5 tales of the now horribly politically incorrect Evil Oriental Mastermind, all of them pretty cheap and pretty bad. It was 1968's BLOOD OF FU MANCHU, however, that got renamed AGAINST ALL ODDS...and also KISS & KILL...as well as FU MANCHU & THE KISS OF DEATH. None of which apparently helped its box office. 1969's CASTLE OF FU MANCHU was the worst of them all, though. If I'm correct, it was only released in the US a few years later as 3rd feature drive-in fodder.

I watched SHIRTS/SKINS the same night as you did and also enjoyed it - a bunch of guys who regularly play basketball played an increasingly high stakes version of capture the flag, as I recall. Great 1970s cast, too: Rene Auberjenois, Bill Bixby, Leonard Frey, Doug McClure, McClean Stevenson, John Karlen (Willie from Dark Shadows), Loretta Swit - one of those films that you could probably never find anymore but which was just a good, fun movie.