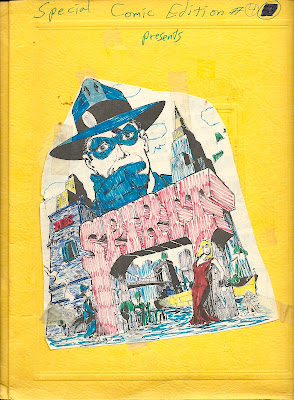 It rained  a lot today.

Mom wet shopping and got me The Beatles' WHITE ALBUM. I only like about half the songs but I'm still glad I've finally got it!

I watched EARTH VS THE FLYING SAUCERS for about the 8th time.

I also saw The Bunny Pageant and a show called THEY'VE KILLED MISTER LINCOLN which gave me lots more facts to use if and when I rewrite SITUATION SIX.

I made a SPIRIT folder with daily strips clipped from THE GAZETTE.

NOTES: THE WHITE ALBUM has never been a favorite of mine. I fall into the category of the folks who think it would have made a truly great single record but no...they self-indulgently had to put out everything.

EARTH VS THE FLYING SAUCERS is Ray Harryhausen's special effects extravaganza. Oddly enough, the reason I had seen it so many times is that they used to show it at school in assembly every year! In grade school. Cheri McAvoy got scared once and buried her face in my shoulder.

SITUATION SIX was my time traveling tale of Lincoln as villain from the future.

THE SPIRIT I'm referring to here is the daily strip version as reprinted in THE MENOMONEE FALLS GAZETTE. I clipped them out and taped them in a yellow folder...which I took down from the shelf and scanned just now, 38 years later. For the cover I clipped and colored (badly) an otherwise lovely Walt Simonson rendition of Will Eisner's evergreen hero, also from TMFG.

Lincoln a villain from the future? Silly Steven. Of course we now know Abraham Lincoln was in actuality a vampire killer. Get your facts straight.

Tom, my family just laughed out loud when I read them your comment and Steve's entry. I am convinced that BAD movie will warp a lot of kid's historical knowledge when it becomes confused with true history! ARRRGGGHHHH!