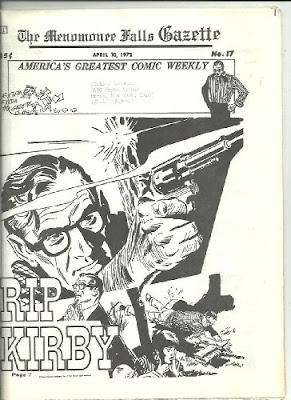 Two days into the second semester and already the Health teacher is absent! Not that I really cared. Gave me a chance to finish my Algebra and also my book report.

My biggest problem right now seems to be that there are 11 issues of THE GAZETTE at Kidd's that at the moment I can't afford. I sure hope something turns up soon in that area before I miss them.

NOTES: This was Algebra 1 I had this year and I loved it. I had never been big n Math but I really liked Algebra. Later, in high school, Algebra 2 would not be as simple to me.  Luckily, my son is a math expert all around. He took online calculus classes last summer...for fun.


I dearly loved THE MENOMONEE FALLS GAZETTE  (a whole newspaper of nothing but comic strips!) but the issues were nightmarish to store after they started building up. In the latter days of my 1976 Journal, it was these issues that I was cutting comic strips from!
Posted by Booksteve at 12:04 AM

Watched the pilot for Chopper One which aired this date, a "CHIPS in a chopper" with Dirk Benedict and Jim McMullin. The banter was somewhat "TV Writing 101" stale, but also weird to put a whole "cop-drama" story in a 1/2 hour format.

Also watched the usual along with this:
The Waltons "Heritage" (with Jim Rockford's dad, Noah Beery)
Kung Fu "A Dream Within a Dream" (with Drew Barrymore's dad)
Streets of San Francisco "Chapel of the Damned" (This is becoming hands-down my favorite show in my binge!)