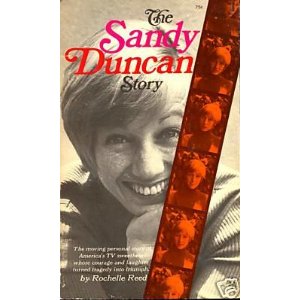 I answered my pen-pal letter this evening.

Earlier in the day, I started Health class at school, the first day of the second semester.

Today seemed like early Spring to me and that got me thinking about Debbie, again.

I read THE SANDY DUNCAN STORY today for my English book report.

NOTES: My pen-pal was relatively recent at this point, a Japanese girl my age named Yoshiko. We would correspond for about 5 years.


Sandy Duncan is sadly pretty much a trivia question, today, but she was a fun actress/comedienne in the early seventies whose rising star was shot down by surgery that left her blind in one eye and caused her hit sitcom, FUNNY FACE,  to be put on hold. When it returned, it was completely revamped but never quite as popular. She stayed in the public eye for the remainder of the decade, her most notable role being as PETER PAN onstage. The book I read was found on the shelf in English class and was by  Rochelle Reed. Seen above, should you be interested, copies can be had for a penny via Amazon.
Posted by Booksteve at 12:52 AM

Aired on the date that I watched in my binge-a-thon:

Banacek with George Peppard (Perhaps the most chore-like of my binges since the main character is one of the most unsympathetic, ie: a smug pr*ck; also just a weird concept in finding lost/stolen items of wealth. Again, a lot of scanning back to pick up lost plotpoints, which is futile when it comes to the final Poirot-like scene...) "The Vanishing Chalice" no different, just Banacek "kicking down" Christine Belford's character more. A mention of John Prine, though (quite a surprise...)

I did re-watch and enjoy "Happy Days" recently, which premiered on this date.

I never cared for Peppard in anything else. Yes, Banacek is an arrogant prick but so was Peppard so the role fit him to a T. Look for the recent SIMPSONS episode that revived the character...even though no one under the age of 50 is likely to even know who it is!